Ah, the many uses of ginger! Garlic might be my favorite spice but I have to admit that ginger is a more versatile spice. Use it for sauteing to flavor a dish, grind it to paste to make a marinade, simmer sliced fresh ginger with water and you have ginger brew.

Ginger is a tuber which is consumed whole as a delicacy, medicine or used as spice for cooking or tea. It is the underground stem of the ginger plant, Zingiber officinale. Besides its genus, the plant family to which it belongs–Zingiberaceae–was also named after ginger. Other notable members of this plant family are turmeric, cardamom and galangal.

The ginger plant has a long history of cultivation, having originated in Asia and is grown in India, Southeast Asia, West Africa and the Caribbean. It is sometimes called “root ginger” to distinguish it from other things that share the name “ginger”.

Young ginger rhizomes are juicy and fleshy with a very mild taste. They are often pickled in vinegar or sherry as a snack or just cooked as an ingredient in many dishes. They can also be stewed in boiling water to make ginger tea, to which honey is often added as a sweetener; sliced orange or lemon fruit may also be added. Mature ginger roots are fibrous and nearly dry. The juice from old ginger roots is extremely potent and is often used as a spice in Indian recipes and Chinese cuisine to flavor dishes such as seafood or mutton and vegetarian recipes. Ginger acts as a useful food preservative, and has been proven to kill the harmful bacteria, salmonella. Powdered dry ginger root (ginger powder) is typically used to spice gingerbread and other recipes. Fresh ginger can be substituted for ground ginger at a ratio of 6 parts fresh for 1 part ground, although the flavors of fresh and dried ginger are not exactly interchangeable.

Ginger is also made into candy, is used as a flavoring for cookies, crackers and cake, and is the main flavor in ginger ale—a sweet, carbonated, non-alcoholic beverage, as well as the similar, but spicier ginger beer which is popular in the Caribbean.

Fresh ginger should be peeled before being eaten[citation needed]. For storage, the ginger should be wrapped tightly in a towel and placed in a plastic bag, and can be kept for about three weeks in a refrigerator and up to three months in a freezer.

On a cold, wintry day there is nothing like a steaming, aroma-filled cup of ginger tea to warm you up and awaken your senses. I bought this ginger tea which I had found in Vietnamese Shop near us. It is a powder one, don’t need to add sugar in it, just stir in boiled water and enjoy the aroma. I remember my late nanay, she used to pound a fresh ginger root ang cook it as tea for breakfast. I always added sugar at the end. She drink her ginger tea without sugar. 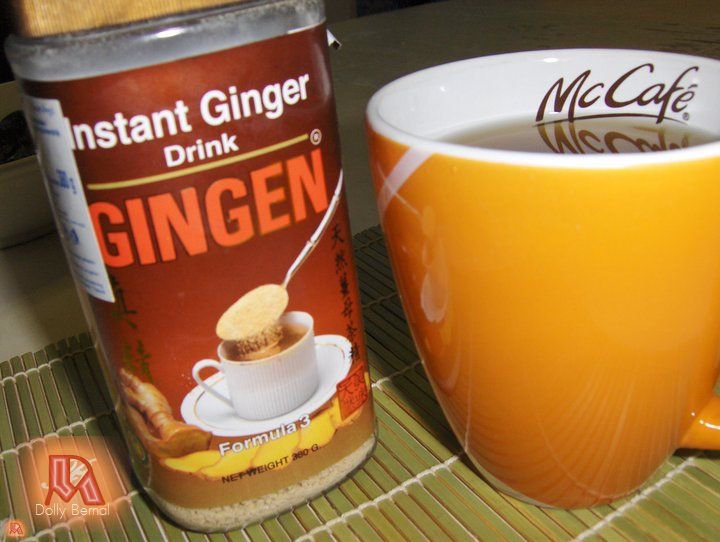 Ginger is also used extensively in aromatherapy. An essential oil is extracted from steam distilling the unpeeled, dried and ground ginger root. Ginger oil is used by combining it with the oils of cedar wood, sandalwood, and patchouli, which renders a spicy and woody scent to the mix.

Ginger tea has been used as a remedy against flu and colds for centuries, both in India and China, as well as other countries in the east. According to Chinese culture, its powerful yang energy is what warms the lungs and stomach. Ginger tea has been used in China for 2,500 years to treat sore throat, nasal congestion, and sinus pain.